Interviewing My Grandmother About the Jackson Water Crisis


When the effects of heavy rainfall, a flooding river, and unreliable water system collided in Jackson, Mississippi, this summer, people were left without access to safe drinking water for two months—a dangerous crisis that’s still affecting locals today. In the city, where more than 80 percent of the population is Black, residents have long felt the impact of community divestment and dismissive state-level governance. Boil water notices have been in place countless times throughout the years, and in the middle of this summer’s crisis, Mississippi Gov. Tate Reeves told a crowd, “It’s also, as always, a great day to not be in Jackson.” The result is a place filled with people who rely on one another for support—people like my grandmother.

A true southerner, my grandmother Grace Sweet is a proud Jacksonian, and she’s seen, time and again, how the city’s history repeats itself. Her journey to Jackson began at just three weeks old; when her mother died within days of giving birth to her, Sweet’s family sent her to live with her maternal aunts and uncle in the capital city. Now, 90 years later, maternal mortality rates for Black women in the United States are still dismal, and affected by other public health issues, like lack of access to clean water. 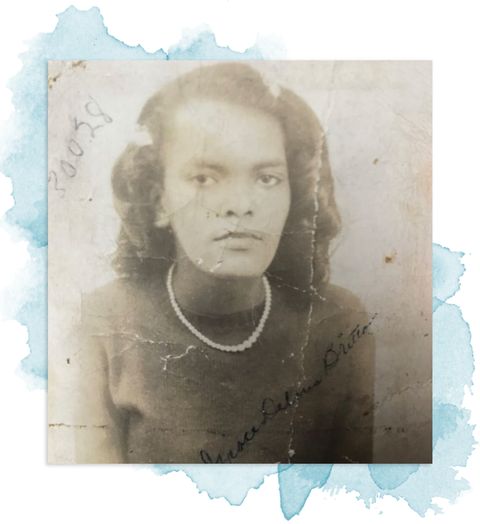 Sweet as a young woman.

My grandmother was raised on Church Street, in what was known as the Sugar Hill of Jackson. Named after Sugar Hill, New York, it was where Black professionals lived during the ‘30s and ‘40s. She graduated from the local historically Black college and went on to teach at a nearby high school. This is what Jackson represents to her—a close-knit community, culture, and the deep roots of our ancestry. But it’s also taught her through adversity. In 1979, my grandmother was a 47-year-old teacher when heavy rain caused the Pearl River to overflow, wreaking havoc on the city and forcing Mississippians to navigate boats in floodwaters. Fast forward to this year, the same river flooded and resulted in an overwhelmed and broken water system.

I’ve spent much of my own life growing up at my grandmother’s and going to school in Jackson, and I wanted to talk with her about these parallels, about her perspective having lived through several of the city’s water crises. So on one of the last days of summer, I helped my grandmother out of the car as she headed back from the Catholic church our family has gone to for generations. We neatly stacked two large containers of water we got from the community collection at mass next to her existing row on the kitchen counter. 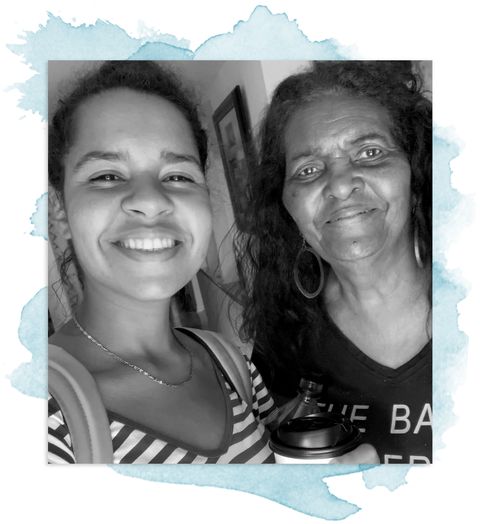 The author and Sweet.

With more than enough bottled water, my grandmother explained that she planned on using this supply for cooking, drinking, and brushing her teeth. I haven’t seen her drink water out of the faucet for years, and she says she doesn’t ever plan to again as a precaution. Below, two generations of Mississippians discuss how we got here.

Grandma, do you remember your first experience having water issues in Jackson?

Growing up, I always knew we had flooding issues, because we lived in what they called “downtown,” not too far from the Capitol, and the Pearl River [a 444-mile river extending from Mississippi to Louisiana] ran along the eastern side of the city. It would always overflow, and the people who were living in Flowood [a neighboring city] would have to get in boats and come to work. When it was flooding [in 1979], some of them went to school in Jackson, and they would have to get a canoe-like boat to come into the city.

We had all kinds of precautions in 1979. I remember the end of Monument Street would fill up with water, and we couldn’t get through to get to school. That place was filling up and overflowing with water, and it’s still doing it. The water has been an issue for so long. I think that when something happens repeatedly and often, you just get used to it.

How did the 1979 flooding affect you, your family, and the children you taught? How does it compare to this year’s water crisis?

We couldn’t use the water, so we had to have substitutes for drinking, cooking, everything. It affected the whole city, but not as badly as it did some areas.

This water issue has been going on in Jackson for years. It has not been fixed. I don’t think it has been taken seriously enough, because when we heard about the water up in Flint, Michigan, several of us talked about how they have the same problem here; they’re just ignoring it. It’s going to take hundreds of thousands of dollars to fix this problem—if ever. [Editor’s note: According to Jackson officials, repairs to the city’s water system could cost more than $1 billion.] But we have been living this all of these years. I can’t remember the last bit of tap water I drank; I always kept bottled water. A lot of us kept bottled water for drinking for years and years. 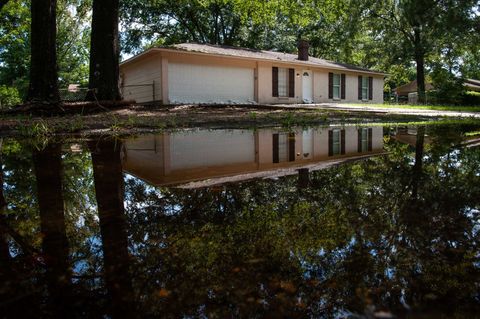 Floodwater from the Pearl River in the streets of Jackson, Mississippi, on Sept. 1, 2022.

In your words, what has led to the Jackson water crisis?

It’s due to a lot of the politicians, like the governor, who turn money down. At one point, maybe we could have had some money to help, but the governor of the state did not release money for Mississippi. I think it’s just awful, and it’s been building up for decades. Right now, the sewer lines here, many of them are broken. It smells so badly that if you are driving along in your car, you can smell this odor [in certain areas].

How have you seen the water crisis specifically affect older people?

We don’t have [reliable] public transportation. People are trying to help by carrying water, carrying food, and everything…It makes it hard, even for older people like me. I can’t carry those jugs anymore without feeling sensations and tiredness in my feet. They’re bringing us water, but we still have to pick it up and carry it.

It’s unfair, and it didn’t have to happen. It doesn’t have to be that way. It was ignored over decades.

Do you remember anything ever being done to help on a national scale, like people coming down to the city to help?

No, not really, not until now. Now they’re everywhere trying to help, because it went national. It hadn’t been national. I [now] get calls from friends all over this state wanting to know if they can help me. I’ve had them [from] as far as Wyoming. “Grace, are you okay down there?” We have people coming from all over the place offering assistance and care. Then you’ve got the people here in Jackson who are trying to help each other, especially the older people. They are really making sure they have water and transportation. Money has been taken from this state by the politicians. We had the money to do work on this infrastructure, but nothing has been done. It’s just been neglected. When I was in high school we were having some of the same problems; I was 16 then, and I’m 90 now.

How did people respond to the crisis back when you were a teacher in the ‘70s, and what did you take away from that experience?

At the school where I was a teacher, they were having the children help get clothes and raise money for people. This student was a class leader, and he said, “Well. my mama said they had floods, and they never raised money before. But now that the white people are affected, they are raising money. I don’t think that’s fair.” And they wanted to [suspend] him. Me and several students said, “No, you’re not going to do that, because he’s telling the truth.” He spoke up against it, and we backed him up and did not let them bother him.

If you don’t address the entire population—if you just take sections where things are addressed better and quicker—you’re going to have these kinds of issues. This is what has been going on in Jackson for so long, and it’s wrong. You have to do equally if you plan to live equally. Treat everything the same. Take care of the water everywhere, not just in one little section of town or one little section of the state. There’s no reason nowadays that we should be worried about water. 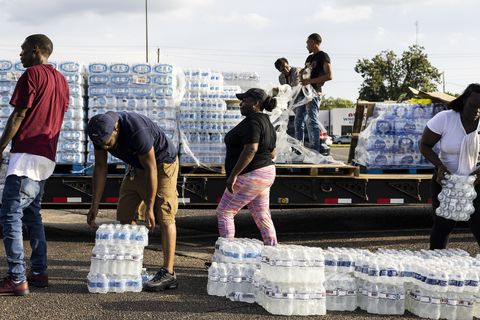 Cases of bottled water are handed out at a Mississippi Rapid Response Coalition distribution site on Aug. 31, 2022 in Jackson, Mississippi.

How else have you seen Jackson change over the years?

People are exiting. They’re getting out of here. People started moving to surrounding little [cities], like Madison, Brandon, Clinton, Byram. The city has dwindled down. The population has dwindled down. Also, the businesses have moved out of here, restaurants and dress stores. I don’t have anywhere I can go shopping to get a nice outfit I would like to buy.

I refuse to go to Madison, to go to Clinton to buy anything. I refuse to go to these neighboring places when our city has been torn and ripped apart. I’ve been here since I was three weeks old. I came here a baby. I don’t plan to run to a neighboring city. I’m just going to ride it out until it’s over for me.

Do you think there’s good that can come out of this?

Well thank you sweetie. I’m just telling the truth. The truth will set you free.

This interview has been edited and condensed for clarity.

Denise Powell is a physician, multi-generational Mississippian, and someone who is drawn towards health equity, music, dancing, and creative energy. She is passionate about community work and loves blending the worlds of health care, activism, and writing when she gets the opportunity.

Reinvigorated, Taylor Momsen Is Ready for Her Next Chapter

The Ukraine repair shop: where Russian tanks go to…